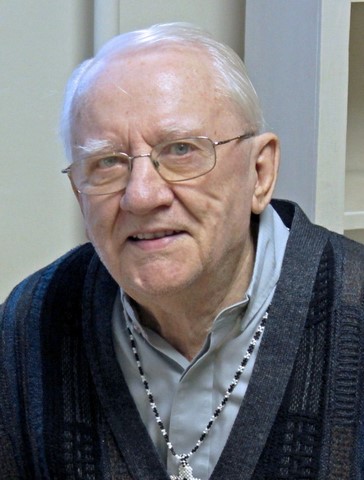 Father Marcel Dionne, a priest of the Foreign Missions Society, died in Montreal on November 3, 2021, at the age of 91 years and 11 months. Born in Isle-Verte (Rimouski) on November 7, 1929, he was the son of François Dionne and Isabelle Fraser. He did his secondary studies at the Seminaries of Mont-Laurier and Rimouski, then his theological studies at the Grand Séminaire des Missions-Etrangères of Pont-Viau. He was ordained a priest on June 29, 1956 and, after studying in Rome (1957-59) to obtain a License in Canon Law, he left for Argentina on September 24, 1963, where he worked as a missionary until 1984. In Argentina, from 1979 to 1984, he was Vicar General of the Diocese of Resistencia. He was also a missionary in Honduras (1993-2009) where he was a judge of the Interdiocesan Matrimonial Tribunal from 1998 to 2009.

In Canada, he was secretary to the Superior General and assistant to the General Secretariat (1959-63), a member of the Central Council and Secretary General (1967-73), and Econome General (1984-92). Later, he was responsible for Camp Robert in Tracy (2010-14). At the time of his death, he was living in retirement at the Central House.

He is survived by his missionary confreres, his sisters-in-law Noëlla Marquis, Francine Paradis and Simone Dumont, as well as nephews, nieces and many other relatives and friends.

His funeral will be celebrated in the same place on Saturday, November 13 at 2:00 p.m., followed by the placing of his urn in the columbarium. In his memory, donations to the Foreign Missions Society would be greatly appreciated.