MESSAGE OF THE XIVth GENERAL ASSEMBLY 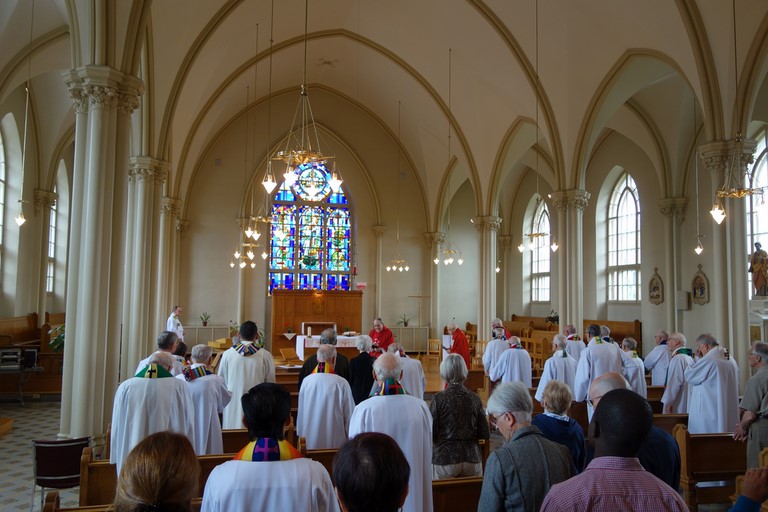 AG 2018
Together, looking towards the future…

The XIVth General Assembly of our Society has come to an and. We emerge from it transformed and with a look firmly focused on the future.

The four weeks of our Assembly were the result of a long process of prayer, reflection, sharing and discernment that was lived out in all our Local Groups, Regions and our PGM through the recollections which invited us to review our experience of the Mission in communion.

It is then from the fruits of our collective reflection of the last year on that theme that the 14 members of the Assembly and the 16 invited guests began to work together so as to discern the missionary summons that the Lord makes to us in the actual context that is ours. It is together in all the inters which makes up the identity of our missionary family today that we searched for the avenues on which the God of life invites us to go forward.

We form a small group, a small and very fragile family. Still, we are the disciples not of a god of the dead, but of the God of the living. All of us are inhabited by the presence of the God of surprises who gives rise to life where it seems to be impossible, either in the person of Elizabeth, an old and sterile woman, or in Mary, a young virgin all attentive to do His will. It is He who gives rise once again, who brings it back to life, when death seems to have won. It is with lucidity and that strong trust in the Lord that we have chosen to live and to look forward.

With the spirit of Pentecost, we reaffirm the Internationality of our Society and the prophetical and evangelical dimension of the Mission in communion as we live it. That choice calls us also to commit ourselves actively so as to explicitly invite young men and women to live out the mission with us as priests or lay people.

It is to allow us to live that mission in all our inters that we have reflected on four (4) major themes: Mission in Communion as a call to testify to our identity and to our charisma for today, Missionary Spirituality and the living together; Promotion of missionary vocations for the SME; Governance at the service of life. We have also examined a particular question, that of the SME WebSite.

As such, we have tried to answer the challenges that we are facing at this precise moment in time. Among others, in the text on governance, we have decided to make our structures lighter and so adopted ad experimentum an unicameral way of functioning. Yet, it is not simply a question of structure. We have to keep focused on the mission and on the communion. That is why we have developed in that text a reflection on shared leadership that would allow us more horizontality and co-responsibility in the exercise of authority at all levels.

Of course, our way of living out the mission within the SME is audacious. During our Assembly, we had the chance to review the missionary changes lived out by our Society as years went by. What we live actually takes place in the line of audacity and of fidelity demonstrated by our predecessors. As a sign of that audacity lived in fidelity, our central Council is now composed of members coming from our international openness.
Our Assembly has also offered us an opportunity to mutually listen to one another. Joys and difficulties, hopes and fears, dreams and some disappointments were shared. Yet, in spite of all of that, a conviction: it is the Lord who calls each one of us and it is together, in all the inters that characterize our small missionary family that we wish to answer to that call.

Full of gratitude for a past where the fidelity of the Father was always unfailing, trusting in the Risen One who accompanies us in our daily life, hoping in the Spirit who always precedes us, we keep on going forward on the paths of the mission with our eyes looking forward.