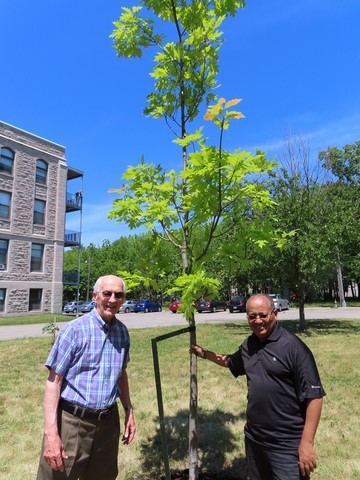 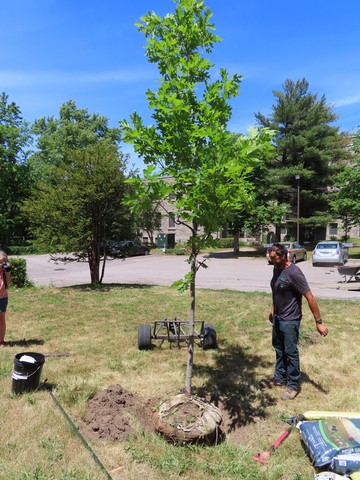 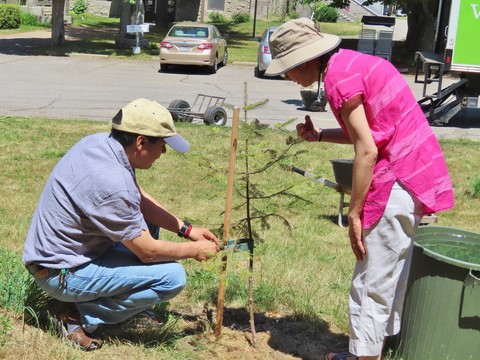 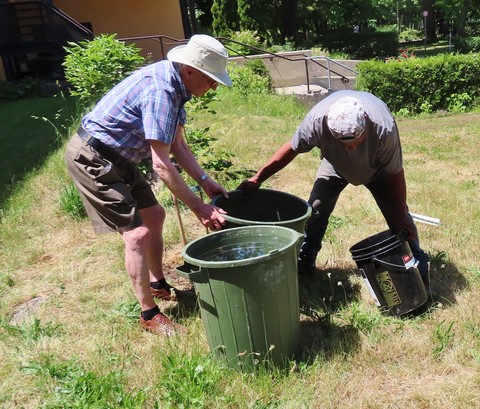 Taking example on the Lord of the Vineyard, the Superior general lovingly prunes the trees of the SME in Laval, while two other brothers take care, one of them of the raspberries lot and the other of the vegetable garden.
Born barely a year ago, the ecological committee (COMECO)  of this same place has sent small teams  of bees on a mission to arouse the envy and emulation of our international colleagues. Alas, the follow-up of that brilliant affair was lost into space. An investigation is carried out. Meanwhile huddled under the apple trees, the mother beehive gives COVID-19 a middle finger and launches a five-star honey called the "Centennial Honey". A vintage! We are still licking our fingers. Those bees are wonders. They fertilize everything. Without them, we would all be dead for a long time. We love them dearly. They are now permanent members of the community of the 180 Place Juge-Desnoyers.
Four or five confreres, silent types with rolled up sleeves, watch over the nature around  to clean, repair and improve, but there is one in  particular who is really married with her and produces many babies. Our table left-overs are turned into compost, our two vines come back to life, around thirty maple trees fill a pile of jugs with golden syrup that escapes any classification.Young spruce trees grow on our lawns, our flower beds are blooming like never before and every day a note is posted on a billboard identifying the leaves, the trees and the flowers of our little kingdom.
On the other hand, a merciless war was waged against the wicked plastic bottles; the victory was instantaneous, resounding and final. Some confreres, because of their age, but also out of love for the planet, are getting rid of their cars. The mowing of lawns is rationalized to allow wild plants to know life before being shredded by lawn mowers. Regarding those terrible machines, if it is not yet possible to get rid of them completely, at least we have swapped the biggest one of them, the noisiest and the most polluting for another kinder mower, fully electric and non-aggressive.
Our special bulletin board regularly displays humorous material that tries to transplant somewhere in our brain that the nightmare is not ecology, but what goes against it. After all, if we do not throw ourselves in the arms of nature, she is the one who throws herself into ours, thanks to another confrere who, camera in hand, will look for and take  pictures  of almost all the branches, the leaves, the flowers, feathers, hairs, drops of water, snowflakes, butterflies, birds, bugs, marmots, sunrises and sunsets that he encounters in the neighbourhood; to our delight, those pictures , some of which are truly breathtaking, flood our e-mail boxes as well as a community public screen that never stands idle.

Those billions of pictures, will they  be enough to "ecologise" us? Let’s hope so. Because we wonder more and more if we can contemplate a future or even salvation for the world if ecology is not integrated in some way with the Good News that we have the mission to proclaim…Lytton surely agrees, since Lytton –three hours drive from Vancouver in the north of North America and not in the Tropics…- the mercury has reached 49.5°C these days! That extreme heat sets off frightening storms that ignite hundreds of forest fires. The small town of Lytton itself has gone up in smoke.

We regret that in the midst of thousands of important things, the celebrations of the Centennial have not yet made any place to ecology, but we welcome the appearance of two oak trees that have just been planted to commemorate the event. We sincerely hope that ecology will find its rightful place in our understanding  of the Bible, in our spirituality, our theology, in our liturgies, in our vision of the Gospel and in our missions. Because we have to admit, ecology, despite our best efforts, remains foreign to what we are. Its fate resembles that of our indigenous people. Because they are one with nature (an invaluable treasure for us and for humanity), we have ignored them or called them savages; they have been despised,  they have been caged in reserves and we have abandoned them. It was necessary to "kill the Indian" and the pagan in them…and "as if by chance", we seized their lands … The Church, which nevertheless did not fail to do very  beautiful things among them, unfortunately  contributed a good part to this cultural genocide. In residential schools for indigenous children entrusted to the religious, the missionaries  who were saints have rubbed shoulders with others who outrageously abused the children. These days, all of that is being discovered. In two weeks, "as if by chance", six Catholic churches were set on fire…The disaster is perfect.

Many crusts remain to be eaten so that ecology can become part of our breathing. Excellent reason not to give up. « Imitate me », wrote the apostle Paul. «Me, I planted, Apollos watered1», but please,  do not be like Eloy. Eloy does nothing for the raspberries, but to eat them, he is always the first one…